The Ghost In The Machine 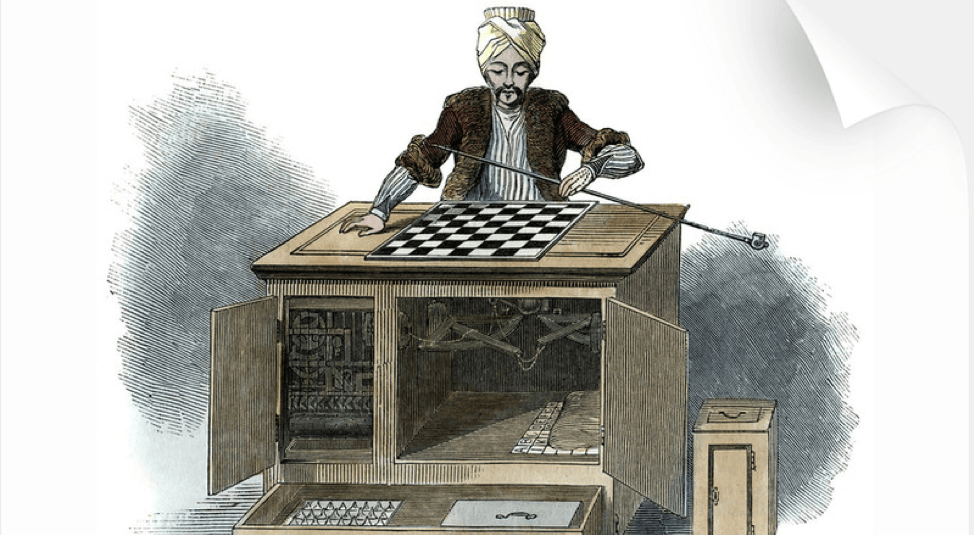 The first time a computer beat a reigning world chess champion was in 1996. It was game one of a six-game match, and Garry Kasparov lost to the machine developed by IBM known as Deep Blue. Over the next five games, Kasparov did win three and tied two – and beat Deep Blue in the series by a score of 4-2.

But over two hundred years previously, chess players were already being threatened. It was 1783, and Benjamin Franklin was living in Paris as the American ambassador to France. He was an enthusiastic and competent chess player, and he lost to what was then the world’s first chess playing machine.

The machine was called “The Turk,” and it consisted of an 18-inch square chessboard, on top of a 4-foot wide cabinet loaded with gears, levers and pulleys. Located at the back of the cabinet was an unnerving life-size mannequin consisting of an upper torso, head and two arms. The figure had a black beard and unblinking grey eyes, and had the appearance of a mysterious sorcerer dressed in a velvet robe and turban.

The Turk was a seemingly complex machine designed and constructed in 1770 by an inventor and mechanical wizard named Wolfgang von Kempelen who completed the project to impress the Austrian empress Maria Theresa.

Kempelen demonstrated the Turk countless times to the Austrian court and attending audiences, always beginning by wheeling out the device, opening up the cabinet and even using a candle to light the impressive complexity of internal mechanics. After showing the internal clockworks, the chess match would commence.

The automaton would begin clanking and whirring, and slowly one of the mechanical arms would grasp a white chess piece to begin the first move. Audiences were transfixed, and the Turk played and beat many of the world’s best chess players. In addition to routing many opponents, another demonstrable capability of the Turk was its ability to complete a difficult challenge known as a “knight’s tour,” a chess puzzle where the knight is placed randomly on the chessboard and is then moved touching every square just a single time.

Audiences were impressed with this mechanical wizard, yet many speculated that there was some trickery involved. Some people suggested there was a small chess champion hiding inside the Turk’s torso and moving the arms.

However, the successor to the empress Maria Theresa, emperor Joseph II, requested Kempelen begin a European tour with the Turk in 1781. It was during this tour, and the visit to France, when the Turk played Benjamin Franklin.

Kempelen died in 1804 and the machine lay dormant until Kempelen’s son sold it to Johan Maelzel’s a musician with an interest in mechanical devices. Maelzel then toured extensively with the Turk, and it was in 1809 that Napoleon Bonaparte played the Turk.

According to eyewitnesses, the Turk began by saluting Napoleon. Contrary to the rules, Napoleon began with black making the first move, and instead of the Turk picking up the piece and moving it back to its starting position, the game continued. Soon thereafter, Napoleon made an illegal move, to which the Turk responded by moving the piece back to its starting position. Napoleon attempted the illegal move a 2nd time, and the Turk removed the offending piece before continuing with its own move. Perhaps in an attempt to further test the automaton, Napoleon attempted an illegal move a 3rd time, at which point the Turk knocked all the pieces off the board. Napoleon evidently thought this was humorous, and then played a serious game that he lost in 19 moves.

Maelzel continued touring with the Turk in the United States, where the writer Edgar Allen Poe observed one of the demonstrations. After seeing the demonstration, Poe was convinced the automaton was a fake, and published an essay in 1936 explaining his theories and ideas as to how it functioned.

Just a couple years later, Maelzel’s time with the Turk ended, when he died onboard a ship while returning from Cuba to the United States. Years later, the Turk was purchased by a group of people interested in discovering its secrets, and was eventually placed into a museum in Philadelphia where it sat quietly collecting dust. During the night of July 5th, 1854, the museum caught fire and the Turk was completely destroyed.

As it turns out, the abilities of Kempelen’s Turk did not involve someone hiding inside the torso. But it did rely on a chess master hiding inside the back of the cabinet, concealed behind all the deceiving gears, levers and pulleys. After quietly sliding from side-to-side while the right and left side cabinet doors were alternately opened to display the dummy mechanics, the covert operator would light a candle and by following magnets associated with the chess pieces on the board above his head, would control the Turk’s arm and fingers by moving a series of levers.

The Turk was a cleverly constructed ruse that fooled countless people for decades, including royalty, statesmen and politicians. Maybe there’s a distrust of computational machines remaining to this day.

While Garry Kasparov beat IBM’s Big Blue in their 1996 six-game match, over the next fifteen months Deep Blue was significantly upgraded, and was known internally within IBM as Deeper Blue. A rematch was set to play Kasparov again. This time, the six-game rematch was exceptionally close, and after Kasparov made what looked like a mistake in the final game, Deeper Blue won the series of six matches 3 ½ to 2 ½.

Immediately following the loss, Kasparov accused IBM of cheating and insisted on a rematch. IBM declined and dismantled Deeper Blue.

Tom loves building meaningful businesses and technology (with people who care).Follow him on LinkedIn. Reach him at tomtriumph.com or on Twitter @thomastriumph