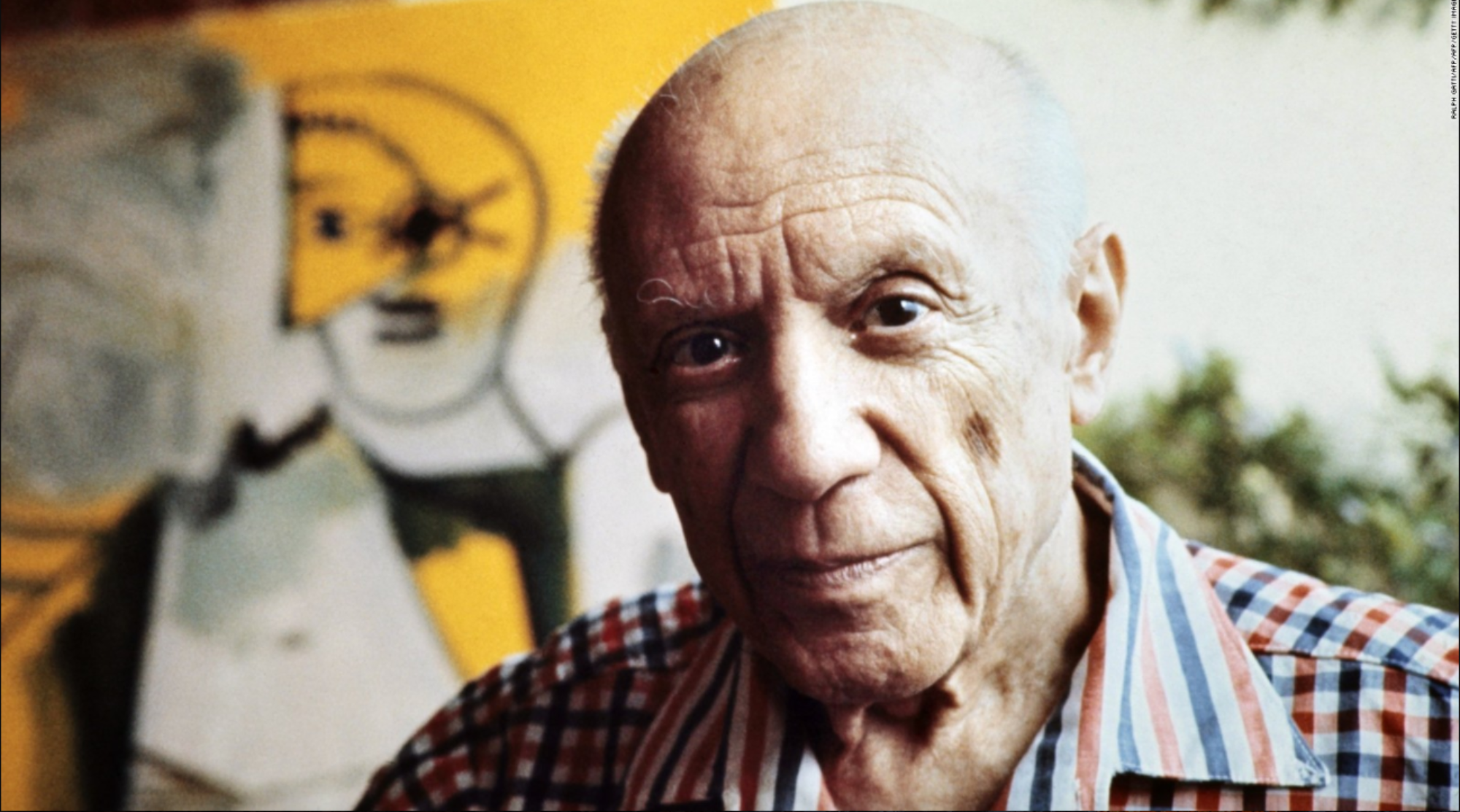 Can you guess who worked at this extremely cluttered desk in a very average sized room? Hint: Some of the most innovative thinking the world has ever seen took place there (and the photographer gained access by slipping the building superintendent a fifth of scotch).

It’s a commonly shared thought among many people, though perhaps often not expressed, that major innovation and creativity happen – elsewhere. And by “elsewhere,” the thinking is, “somewhere other than here.” Not in this unremarkable state. Not in this average town. Not at this company, not with my boss, not with my job.

And the worst thinking of all… not with me.

This thinking is so common, that sociologist have a name for it. It’s called the worse-than-average effect, and it’s the human tendency to underestimate one’s achievements and capabilities in relation to others. Turns out this effect seems to occur when chances of success are perceived to be rare.

If you catch yourself thinking this way, congratulations are in order. Sociologist have determined that people of high ability tend to underestimate their relative competence in comparison to others.

The problem is that having a worse-than-average outlook diminishes innovative and creative thinking. After all, why get started if it probably isn’t going to happen.

Reality of course is different. Innovation and creativity happen wherever people are intent on making a change and having an impact. It happens everywhere, and with every kind of person.

Despite the differences in age, sex, location, ethnicity, socio-economic level, etc –  these creators share common characteristics – a communal way of looking at the world and their place in it – that underpin their beliefs about innovation and creativity.

And this thinking should be applied to your creative work.

Your expectations are a good barometer for what’s possible. It’s what Henry Ford meant when he said, “Whether you think you can, or think you can’t, you’re right.”

We tell ourselves a story about being creative – or not. Then live our story and do the work creativity requires – or not.

Here are 10 Secrets shared by world-class creators that you should take to heart. The people mentioned herein have broad and varied backgrounds, yet the characteristics are common among them all.

Already mentioned, and worth repeating. Be aware of the story you tell yourself. Even if the story is so buried in your subconscious that you’re not even aware it’s there.

Frank Lloyd Wright attended only two semesters of college before leaving to find his first job as a draftsman for $8 a week. He learned on the job and was driven by a belief in himself.

Wright said, “The thing always happens that you really believe in; and the belief in a thing makes it happen.”

Wright went on to create over 1,000 structures and a design philosophy that influences architects and builders to this day. He was recognized by the American Institute of Architect as “the greatest American architect of all time.”

“I think it is possible for ordinary people to choose to be extraordinary.” – Elon Musk

It may seem an unlikely attribute. After all, the likelihood of anyone having to face a terrifying fear is unlikely.  That’s the tricky thing about bravery, we think of it as being necessary only when facing a major threat or recognized enemy.

But the small fears, the ones we’re barely aware of, may be just as insidious as the more daunting ones. Those micro-doubts accumulate as barely heard whispers, until years later, our possibilities have been silenced beneath a chorus of “not today.”

J. K. Rowling created a world of magic and intrigue when she wrote the Harry Potter stories. Her work brought joy to millions and in the process Rowling went from living with government financial assistance to becoming the wealthiest woman in England. She took pen and paper, pushed aside her doubts, and bravely moved forward. Rowling said, “It takes a great deal of bravery to stand up to our enemies, but just as much to stand up to our friends.”

And bravery is a habit that builds. Rowling said, “You sort of start thinking anything’s possible if you’ve got enough nerve.”

“Dare to take chances, lest you leave your talent buried in the ground.” – Phil Knight

If there ever was a common theme it’s this. Every wildly innovative person has failed time and time again. And then, they kept learning and kept moving forward. Relentlessly pursuing their objective.

Richard Branson said, “You don’t learn to walk by following rules. You learn by doing, and by falling over.”

If you want to succeed, keep moving forward.

Researcher and author Dr. Anders Ericsson, has spent a stellar career studying the acquisition of expert performance. He’s the person responsible for what’s generally known as the “10,000 hour rule,” related to the importance of deliberate practice.

Ericsson wrote, “The differences between expert performers and normal adults are not immutable, that is, due to genetically prescribed talent. Instead, these differences reflect a life-long period of deliberate effort to improve performance.”

That’s decades of highly impactful scientific research in a single sentence. Becoming an expert is not due to genetics; it’s due to deliberate practice.

It’s hard and time-consuming work.  And no one ever created great work without spending untold hours developing and honing their skills.

Which is why the true creative or innovator stands out. A small percentage of people are willing to do the work.

The artist Banksy noted, “All artists are willing to suffer for their work. But why are so few prepared to learn to draw?”

Innovators don’t wait for the magic to happen. They get started.

The American artist and photographer, Charles “Chuck” Close, knows about building from where you are. He has a rare condition known as prosopagnosia, which makes him unable to recognize faces.

Yet Close’s large-scale portraiture works hang in galleries around the world and sell for several million dollars.

“Inspiration is for amateurs. The rest of us just show up and get to work. If you wait around for the clouds to part and a bolt of lightening to strike you in the brain, you are not going to make an awful lot of work. All the best ideas come out of the process; they come out of the work itself.” – Chuck Close

Look at any masterpiece, and you’ll find there’s a lesson in editing.

You’d be hard pressed to find a more successful company than Google, or a simpler home page. Apple products are noteworthy for the simple design philosophy espoused by Steve Jobs and Jony Ive.

And it’s not just technology products that benefit from simplicity. Returning to Frank Lloyd Wright, “An architect’s most useful tools are an eraser at the drafting board, and a wrecking bar at the site.”

Serial entrepreneur, Peter Thiel asks a great question about multi-year plans. His question, “Why couldn’t you do it in 6 months?”

Of course not everything can be done in 6 months. But it is a bold and valuable question. Is the timeline really more about the story we’re telling ourselves?

XPrize founder Peter Diamandis and Steven Kotler explore the very topic of striving for bold work in their book, “Bold” How to Go Big, Create Wealth and Impact the World.” Diamandis says, “Lots of people dream big and talk about big bold ideas but never do anything. I judge people by what they’ve done. The ratio of something to nothing is infinite. So just do something.”

People innovating and creating are, by definition, focused on bringing something new into the world. Whether producing a product, process, painting or poem – the goal is to have an impact on others.

We’re living in a connected world, and you can reach a large number of people with your work, and they in turn can collectively reach an even larger number of people. And that’s how good work spreads. But, only if it’s worth spreading. Only if it benefits people in some way.

It’s how Mark Zuckerberg describes the fundamental mission of Facebook. “The thing that we are trying to do at Facebook, is just help people connect and communicate more efficiently.”

And helping people is exactly how Jack Ma, the founder of the world’s largest retailer (passing Walmart in 2016), described his company Alibaba. “My job is to help more people have jobs.”

Curiosity and hunger are the twin forces of creativity. They are the reasons Picassoexplored new periods of painting and sculpting throughout his life, and left a legacy in various styles. The Blue Period, The Rose Period, Cubism, Classicism, Surrealism.

Staying curious requires a sincere appreciation and humbleness in regards to the possibilities before you.  And that in recognition in turns drives the appetite to continue developing.

“We don’t know a millionth of one percent about anything.”  - Thomas Edison

“Microsoft is always two years away from failure.” – Bill Gates

Richard Branson said it best. “Life is a helluva lot more fun if you say yes rather than say no.”

And what about that cluttered average office desk at the beginning of the article? That’s the desk of Albert Einstein. The photograph was taken on the day Einstein died, on April 18, 1955.

The photographer Ralph Morse was commissioned by Life magazine to take photographs on the day one of the world’s greatest minds died. On his way to the Institute for Advanced Study at Princeton University, Morse stops to buy a case of scotch.

“I knew people might be reluctant to talk, but most people are happy to accept a bottle of booze, instead of money, in exchange for their help,” explained Morse. “So I get to the building, find the superintendent, give him a fifth of scotch and like that, he opens up the office.”