The 12 Dimensions of Courage 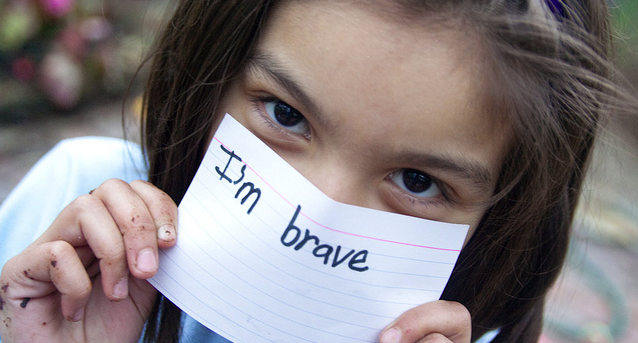 I’d only been out of college for a few years, when my boss made an offhand comment that has stayed with me for decades.

He said, “I like to take words apart to better understand myself.”

His name was Alan. I don’t remember his last name, but I remember he used to talk slowly – like he was thinking about every word. He seemed old, though looking back, he was probably in his late 30s.

I asked him what he meant. “Well, I’ll give you a real example” he said. “One from just the other day.”

We worked at a large aerospace company outside Los Angeles. My desk was made of grey sheet metal, and was in the middle of a cornfield-size room with hundreds of other identical grey desks arranged in a grid on the linoleum-tiled floor.

It was a strange place, full of unusual characters. Once, for no apparent reason, a draftsman told me, “I’ve forgotten more than you know.” Another guy, an old engineer, used to remove the cap from a BIC pen and nonchalantly scrape wax from his ear canals while talking to you. On another occasion, I earnestly asked someone named “JP Smith,” what the initials stood for in his first name. He became enraged and yelled, “Those aren’t initials. That is the name my parents gave me, and it doesn’t stand for anything!” Another guy whistled made-up tunes – CONTINUOUSLY. I mean, he literally always whistled. It was torture. To this day hearing someone whistling makes me cringe.

In comparison to the other people surrounding me in the cavernous cubicle farm, Alan was normal. We were in his office. It was one of several cubes that had seven-foot walls but no ceilings, that formed a row alongside the open floor plan.

He took out a sandwich from a paper bag and while eyeing it, said, “Take the word discourage.” He exaggerated the prefix dis. “Well, the DIS, is Latin for apart. So, whenever I might be feeling DIS-couraged,” he continued, “I ask myself ‘Do I want to be the kind of person that’s apart or separated from courage?’ ”

I nodded in understanding.

For whatever reason, I’ve thought about that conversation occassionally over the past 30 years. And during that time, whenever I read about someone with courage, or saw someone act heroically – I would think about Alan’s comment and the difference between courage and DIScourage.

Here’s what I think courage often looks like. These are just rough guidelines of course. A fundamental reality of having courage is that it’s available to anyone. There are no age, sex, race, religion or cultural requirements.

And there’s no ONE way (or even twelve) to be courageous. But this is a start.

Staring Down the Fear: Sooner or later, we’re all going to be face to face with something we’d rather not be facing. Loss of a job, illness, economic calamity, natural disaster, death of someone we love. You name it. It’s not that courageous people don’t feel fear, it’s that at some point – they decide to stare it down and punch fear in the face.

When George Harrison learned about the starvation and suffering in Bangladesh, he decided to use his voice for those without one. George helped organize the first ever charity concert, the “Concert For Bangladesh” in Madison Garden.

In addition to raising visibility and money, the “Concert for Bangladesh” was the model for all future benefit concerts. In his book “1,000 Recordings To Hear Before You Die” author Tom Moon wrote, “Pull this out whenever your faith in the power of music begins to wane.”

You don’t have to look far to find someone without a voice. Speak up for them.

Solitude: It’s difficult to stand apart from the crowd. To be the lone voice. To go where you’re not supposed to go.

It’s easy to get behind the curtain (symbol or dogma or culture of the times) and repeat what everyone else is saying.

Supportive: It’s easy to be critical. To shout or mumble (or tweet) why something or someone has failed. To pile on the criticism, while secure in anonymity, authority, or distance.

A courageous person recognizes bravery in others, and doesn’t stand on the sidelines taking cheap shots.

“Any fool can criticize, condemn and complain and most fools do.” – Benjamin Franklin

Saying No Thanks: If you want to separate yourself from the pack of mediocrity, you can’t spend all your time in the pack. You need the confidence and commitment to invest your time elsewhere. Saying “yes” to everything is going to make that difficult.

Consider the Russian cellist Daniil Shafran who, after spending countless hours practicing, won first prize at the USSR All-Union Competition for Violinists and Cellists. All the more amazing as he was 14 years old and had entered unnofficially since he was below the qualifying age limit.

Shafran would often practice a song at twice the speed to challenge himself technically. He described his attitude as, “mercilessly strict with myself when practicing.”

Shafran, as required of any world-class performer, had the courage to put in the countless hours necessary to master his craft, and passed-up lots of other things along the way.

When someone fell onto the New York City subway tracks at the 72nd Street Broadway-Seventh Avenue station and was knocked unconscious, Gray Davis, a dancer with the American Ballet Theater said he, “initially waited for somebody else to jump down there.” “People were screaming to get help. But nobody jumped down. So I jumped down.”

Once on the tracks, Mr. Davis lifted the unconscious man onto the platform, and then heard the coming train in the distance. “It was really scary,” he said. “I don’t know if I had time to process it until I saw my wife coming down crying — then I realized it was scary.”

The opposite of course is shirking from taking your turn. Hoping you won’t be asked to do something uncomfortable because you don’t want to look stupid, awkward or ill-prepared (much less do something dangerous).

Alexandra David-Néel, was a Belgian-French explorer and writer of over 30 books about Eastern religion, philosophy, and her travels. Her work influenced the writers Jack Kerouac and Allen Ginsberg.

To say she lived an adventurous life would be an understatement. She first ran away at age five, wrote an anarchist treatise that was translated into five languages, slept on a bed of nails, and lived in caves. In 1924 she snuck into the Forbidden City. Foreigners were barred from traveling to Lhasa, Tibet, so David-Néel disguised herself as a beggar and then a monk, by smearing her face with soot and wearing a traditional fur hat – and then hid a pistol and a compass under her yak wool rags.

Other people exhibit their courage not by exploring inaccessible foreign lands, but by exploring their inner psychology. Or musical soundscapes. Or solutions to unsolved math problems.

Standing Your Ground: Courageous people reach a point where they say “enough is enough,” and decide that they’re no longer going to continue foregoing what they believe should be theirs. This stance is often directed not towards an external enemy, but to themselves. They demand of themselves, “Will the real me please step forward.”

This is what Eric Thomas, a homeless high school dropout asked of himself – before he went on to get his High School Equivalency, then College degree, then Masters degree and then his PhD.

Saying Your Sorry: Being human entails making mistakes. And when you’re living courageously, that necessitates trying and doing things above and beyond what’s normal. So, yes. There is the inevitability of falling short or screwing up.

Staying The Course: The American writer and educator George Leonard, outlined what the path to mastery looks like in his excellent book by the same title. His conclusion has been proven by neuroscientists and extreme performance coaches and athletes (and our own experiences). Progress is taking place even when there’s not obvious external evidence of improvement. When time is spent seemingly grinding along on the long stretch of the plateau.

Starting: I’ll end at the beginning. At some point, being courageous means getting started. The first step is often the scariest and the most difficult. But without that first step, there is no courageous act.

I left that aerospace company a couple years after working for Alan, and we never connected again. It’s been more than a few decades. My hope is he’s healthy and happy. Wherever he is, I know he’s not DIS-couraged.